Earlier, I posted about the Berlin Wastewater Treatment Plant.

And on October 23, I finally got to see the town’s two spray irrigation sites (where the treated water goes into) and they just took my breath away! I was expecting to see few trees growing on soggy earth. But what I found instead were lagoons, and acres of acres of lush forests with thriving wildlife. 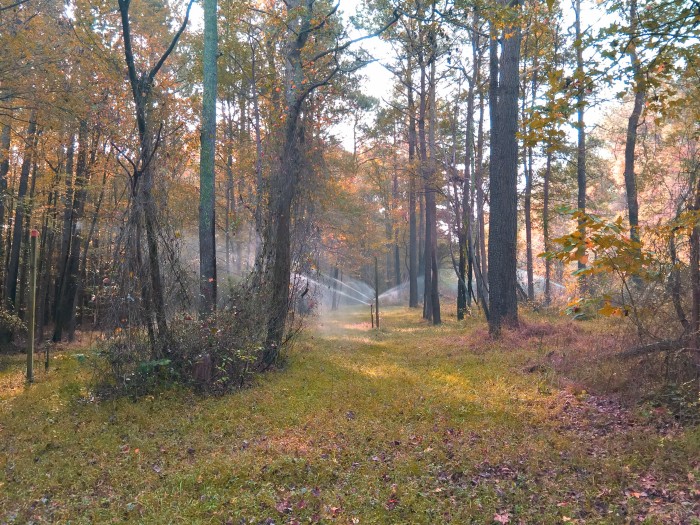 Jane Kreiter, the town of Berlin’s Water Resources Director gave us a driving tour on spray sites 1 and 2. These are located in Libertytown (site A) and Newark (site B), Maryland. She narrated how the woodlands in site A had once been an open field when they had purchased it some time around 1999. Her team had to clear it out from hay and plant some trees. They were able to start spraying in 2009. Its lagoon has a capacity of fifty million gallons. Site B was approved in 2010 and opened 3 years after. It was a piece property outside of the town proper known as the Bounds Farm. Its lagoon has has a capacity of thirty million gallons.

A quick look at the irrigation facility B

Kreiter said both projects were met with much opposition from the homeowners in the area, as much of them did not understand the quality of water being sprayed into the sites. Some even feared that they would find toilet paper in their backyards once the project would commence. But the Town of Berlin, which was supported by the Worcester County Commission, was confident that the Spray Irrigation Site would not bring diseases, would not affect the ground water quality and would not endanger the wildlife. In fact, it is an effort to eliminate the dumping of effluent to the coastal bays.

Facility B, formerly the Bound Farm. See the pumps which receive water from the Wastewater Treatment Plant

The smaller lagoon in Facility B, with a capacity of 30 M gallons of water

The treated water from plant sends water into the spray sites’ lagoons and the lagoons sends these to the six thousand spray heads that are scattered all over the forest. Kreiter’s team conduct regular monitoring to ensure that they are not contaminating the ground  water.

These projects cost the town millions of dollars to put up and years of planning, monitoring and continuous work. But this only goes to show just how serious the Town of Berlin is to its commitment to the environment.

A spray head watering the woodlands

One side of site A is a natural forest and the other is man-made planted with Loblolly Pines. These are being harvested every eighteen years

During the Berlin fellows’ welcome reception, I had the honor to have a conversation with Mayor Gee Williams. He told me that their environmental projects, including the town’s Wastewater Treatment Plant, etc are indeed expensive. But they find ways to secure the financial requirements by collaborating with their stakeholders. This is one of my takeaways from the fellowship: bringing positive change in the community is often difficult because of the cost (financial, logistical, etc.). But as a leader, nobody is imposing on you to pay the cost on your own. You belong to a greater community and it is your challenge to involve them and make them a part of the solution.