Prior my departure, I had a glimpse of my co-fellow’s zero waste lifestyle and I thought I should take this opportunity to be zero waste myself since I would be living with one who is practicing it for a good one month and I could learn from what she is doing and practicing along. It should be facilitating to have a company going against the crowd.

My attempt was quickly hampered by the conveniences and the system so accustomed to having plastic everywhere. My first piece of trash on the journey to DC was from plastic covering of the headphone.

I only realized after I quickly and unconsciously took out the headphone and ready to watch the movies on the plane. And there came along many pieces…so many actually in just one plane ride. This got me wonder how Fong survive this journey without producing any waste while at the same time made me realize how much waste we are generating each day (which I found out by asking her later that she chose not to take the food at all. I really do admire her strength and courage). In just one flight, I realized I produced more than 10 pieces of trash, from plastic covering of the headphone (which I should have easily avoided by using my own), blanket covering, series of plastic cups that flight attendants eagerly served us with on an hour basis to food and snack wrappings. 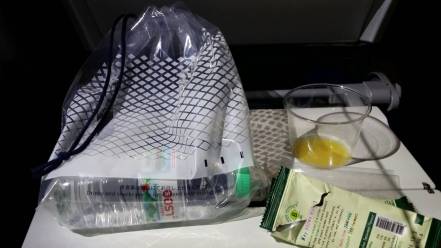 I got discouraged just by how much trash I was producing and how difficult it is to rise above it. Yes you could say it is an excuse. But this got me seriously thinking.

After several thoughts and self-reflection, I realize instead of focusing on the waste I generated I should focus on the waste I had saved from my action. In that way I am motivated to go forward, against the norm and convenience.

(Picture: After some tips and suggestions from Fong, I attempted to reduce some plastic cups from the flight, it sure was not easy. One has to be quick and persistent to say no to plastic disposable.)

This journey also made me realize that zero waste lifestyle may not be for me nor the core value of my organization. However, living in moderation, reducing the waste and trying to push towards eco-friendly products and packaging will be the direction PakDone, the organization I founded is gearing towards rather than limiting and depriving myself of the consumption altogether.

I still could not stop the use of tissue paper that I am so used too, but perhaps if I could find or even develop a way in which tissue paper could be made more eco-friendly and generating income and livelihood somewhere, I think it is the option I would choose. For sometimes, I was wondering if this is an excuse to do things that require strength and discipline like going zero waste…. For now I think not but let’s see how this journey will help me redefine and rediscover what I stand for and what kind of change I want to see….till next time!