In one of my community challenge, hazardous waste is one of my main interest in the program. As we have problem with it in our working site in East Java Province (Indonesia). So, coming to JoCo HHW stands for Johnson County Household Hazardous Waste was incredible. We happens to volunteer for 2 hours and working in one of their division, mixing the paints.

We met with Julie and David at the facility. The facility was build in 1990s, where they’re sorting out HHW behind the trucks. The buildings (that we saw today) was continuously added due to the increase of HHW that come. JoCo HHW accepts residents and businesses. But, the residents have to make an appoint before going into facility and drop off their things and inform the amount of HHW that they have, will it be small load or at the size of pick up truck. The appointment can be made by calling the facility or apply it online. Resident drops off their HHW during Monday to Wednesday. While on Thursday and Friday, the staff will sorting it out. For large business, they only accepts the business which produce 220 pounds HHW/ months. Residents who drop off their HHW don’t have to pay for recycling/ disposal, but business have to pay for it.

Type of HHW that is being stored at the bunker 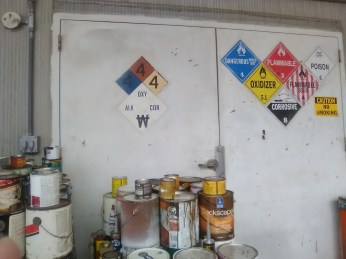 Hazardous class placard is placed at the door

Sorting HHW is done based on 9  class of hazardous chemicals of US Department of Transportation (DoT) which consists of: (1) explosive; (2) gases; (3) flammable liquid and combustible liquid; (4) flammable solid, spontaneously combustible, and dangerous when wet; (5) oxidizer and organic peroxide; (6) poison (toxic) and poison inhalation hazard; (7) radioactive; (8) corrosive; (9) miscellaneous. After they sorting it out, they will  store it for a short time. Based on the regulation, they could store it for more than 90 days. But they rarely store it more than 30 days, because the disposal vendor always come every month. The goal of the facility is reusing the product and reducing the waste which goes to the landfill. Based on the report, their recycled level is up to 75%, which is a good one. 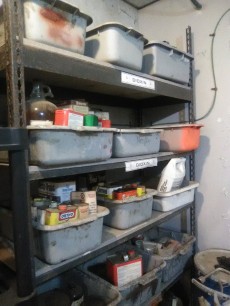 dioxin was banned in 1980s, but until now people still sends their dioxin products

One of the storage bunkers 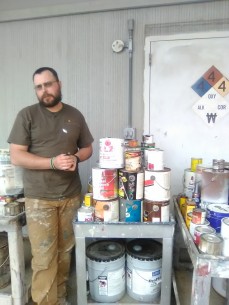 Sorting latex/acrylic and oil based paints

During our tour, we saw a lot of paint can. David told us that they accepts both latex and oil based paint. Oil based paint is hard to recycle as it considered as environmental hazard, which makes the can can’t be recycled (due to its residue) and goes directly to the landfill. There is technology, but for now, JoCo can’t afford it. Meanwhile, the latex paint will be re-blended into 4 main colors: white, beige, brown, and grey. Resident is able to buy this re-blended pain for so much cheaper. White paint is the pricey one, about 15 USD/can (around 5 gallons); brown 5 USD; beige and grey 10 USD. They also have different color such as red, orange, and blue. But this color isn’t as much as the other. This month, they have order from a person, around 200 brown can which is a donation and will be send to Ghana to paint house and schools.

JoCo HHW facility have 3 bunkers, where they store the HHW, from ordinary household products such as bleaching, pesticide, gun powder to ‘hazardous’ products such as dioxin. Dioxin is the most hazardous chemicals as it caused cancer and developmental defects. It also being used in Vietnam war as orange agent. Other chemicals that are being banned but still own by the resident is chlordane and PCP. Some of the product that they have is beaker glass (being used in laboratory) full with unknown chemicals and wrapped in aluminum foil. Other ‘thing’ that we found is water reactive products, which David told us that one family got killed because the product reacts with water and produce poisonous gas. 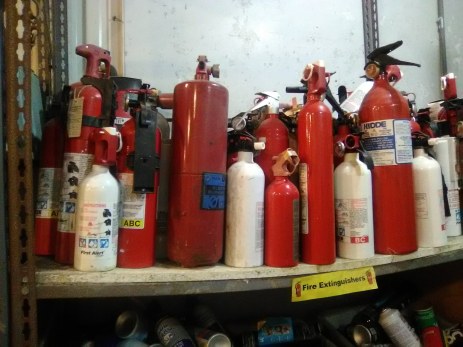 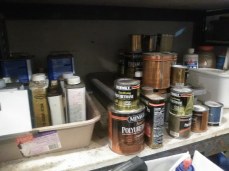 Photo-chemicals can be used by people who got license

Bunker B is used to store the product that can be reused and considered as waste. JoCo HHW try to align with government agency in the process. The reused product can only be obtained by individual who have application license or government agency. The products that is found in the bunker, from polyurethane chemical to photo chemicals. JoCo HHW also accepts: tire (with or without rim), car and cooking oil, lamp, batteries, aerosol, and mercury lamp. Some of the waste (for e.q: cooking oil; freon; fire extinguisher; and lead acid battery) could generate funds from selling it. For mercury lamp/ bulb, the disposal vendor would take out the mercury and recycle the bulb. The last bunker is a vacuum room and use to mix or pour chemicals. During the winter, the gas that is produced is so dense and stay at the lower ground. This condition make some staff feel dizzy, lost of sense of direction, and headache. Another room that they have have function as storing room, where resident could come and get 15 free item/resident/week to be re-use. On the day of our visitation, we saw to people come to the store room to get what they need.

Products which are being kept to reuse by the resident

Regulation for the store room 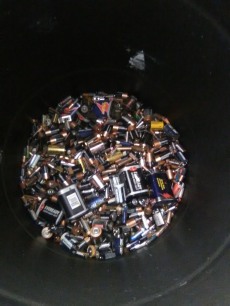 Tire will re-produce into different product 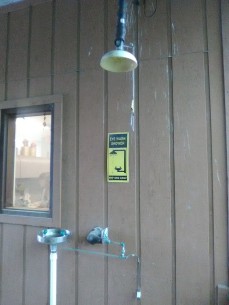 U lamp and mercury bulb that the facility accepted

Unknown product which is considered not hazardous, they checked the pH with pH paper

David and her colleague do use the personal protective equipment (PPE) during sorting out and processing the HHW. That day, David told us that last week he got chemicals splash on him and burnt his skin and make her discoloration on his shirt and pants. He use two type of gloves during his works in the re-blended the latex/ acrylic paints. Mask and green long latex glove is used when he have to pour or mix poisonous products.

Last year, JoCo HHW receives 263 tonnes waste/ year. The cost the county need to pay for either recycling and disposal of the HHW is expensive, for example: they need to pay 1.6 USD/ pound for corrosive products and 1.87 USD/ pound for poisonous product to dispose. JoCo HHW have to pay around 70,000 USD for safe disposal and recycling 4,000 USD last year. How about producer responsibility? There are a small percentage of producer who steps up to take back and/ recycle their product. One of them are the producer of mercury signal thermostat. The producer will take back the thermostat and recycle it. To increase public awareness, the staffs also have education program and go from school to school about HHW and how to sorting it out. They also accept volunteer who would help in the sorting process, re-blended latex paints, and even building the facility. David hope that in the near future, they could have indoor location to sort out the hazardous waste. The sorting location that they have now is outdoor, and it really become hard for them to do it, in particular during the winter.

After leaving the facility, I’m hoping that David and all staff who works continuously with hazardous waste always healthy and there is no long-term impact that they would experience as these chemicals are well-known for their acute toxicity which tends to accumulate and show impact after a long time.